The protein topology database KnotProt collects information about protein structures with open polypeptide chains forming knots or slipknots. The knotting complexity of the catalogued proteins is presented in the form of a matrix diagram (introduced in this pnas paper) that shows users the knot type of the entire polypeptide chain and of each of its subchains. The pattern visible in the matrix gives the knotting fingerprint of a given protein and permits users to determine, for example, the minimal length of the knotted regions (knots’ core size) or the depth of a knot, i.e. how many aminoacids can be removed from either end of the catalogued protein structure before converting it from a knot to a different type of knot. In addition, the database presents extensive information about the biological function of proteins with non-trivial knotting and the families and fold types of these proteins. As an additional feature, the KnotProt database enables users to submit protein or polymer structures and generate their knotting fingerprints. The data currently deposited in this database is summarized in database statistics. 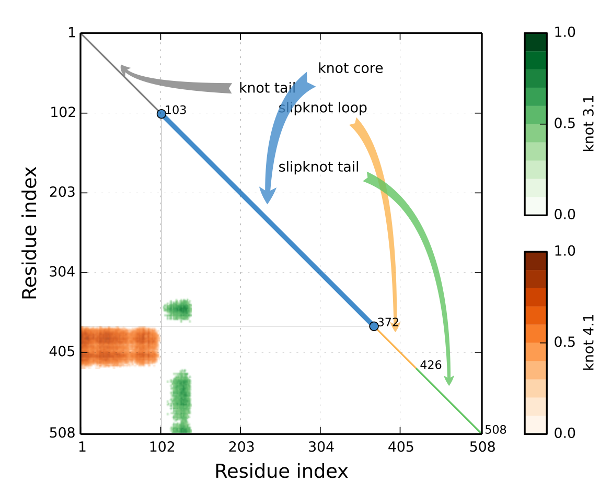 Example of a topological fingerprint with a slipknot motif denoted S31,41,31 detected in a protein.
Number of (slip)knotted chains deposited in the PDB and KnotProt databases. 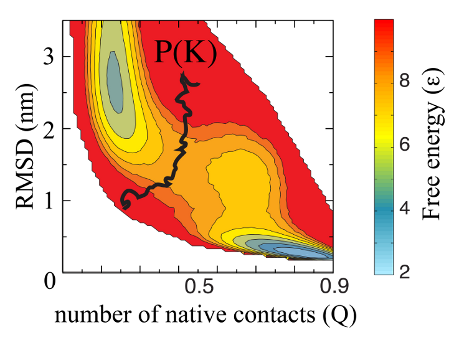 F(Q) Plot Example of evaluation of data obtained from the webserver, based on time evolution of an artificial knot. The figure shows two-dimensional free energy landscape of knotted proteins, measured by the fraction of native contacts formed Q and RMSD. The black curve shows the contour of knot probability obtained from time dependent protein coordinates (based on results in this pnas paper).

The KnotProt can be used also as a server to analyze time evolution of knots and slipknots (uploaded as entire trajectories). Moreover, it can detect complexity in open chains which are not deposited in the rcsb pdb.